Available with 3 INTEREST-FREE Payments with Affirm.

Not deliverable to a P.O.Box .

due to high order volume:

If CoopWorx Water Silo does not become you and your chickens favorite waterer, return it to us within 30-Days for a full refund.
5 reviews

I have the feeder and waterer snd love rhem both!!! 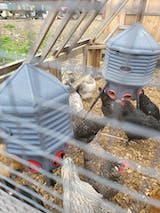 Hi Darla, thanks for the video! We are glad you are happy with both of them. Tom

These product work great. The customer service is 2nd to none. Highly recommend

Thank you so much Billy! So thrilled to hear you have been happy with your CoopWorx! All the best, Kate

We’ve tried several large capacity water options. This is unique because it’s opaque, so the water doesn’t turn green. The base minimizes its footprint. The chickens learned to use it quickly. It’s the perfect complement to our Coopworx feeder. It makes leaving for the weekend much more relaxing. Thanks!

Hi Teresa, thanks for leaving the review on your water silo. We are so glad to hear you are happy with it! Tom & Katie

At first, the girls just looked at me sideways when I put the water silo in their run. The weather was over 100, so I didn't take out their normal waterer when I installed the silo. I showed them several times that water comes out like magic. Nope. Not interested at all! All they did was drink the little bit of water that sat in the little lip. I even tried putting black fly larvae on the nipple. They fooled me by just finding a new way to get treats. Still no interest in where the water magically came from. The weather cooled, I took out their normal watering source that had by now dried up. Voila!!! Overnight, they must have had a meeting. Let's try it! They did, and they absolutely love it! I do too. The water lasts so much longer due to large capacity. But the best part for me is that they can't kick dirt in the water anymore. Clean water for all! Healthier eggs for me!!! :)
As an added bonus, I have noticed that it is "boredom buster" too. Seems like a new competition for them! So happy I pulled the lever and bought this. I figured if I was the only one on earth who had chickens that wouldn't like it, it was returnable. I also was happy that the company got back to me so quickly every time I had a question. All companies should take notice.

Thanks Kevin, that makes our day!